Well I'm off as of Wednesday morning to Texas with Audra and joe and neil... and im so excited! I pick Aud up tomorrow at the airport... woo hoo. then the hair, while the boys go shopping and Neil gets his first taste of US commerce. Tomorrow i will be lucky if i can check email. its all go no quit from 8am till we leave at 330 the following morning. Im hoping to sleep on the plane, but im almost positive thats not going to happen.

Ooh! and i got some of my promo goodies today as well. so ill have a few more things to bring with me. Woo hoo!

So ill update from RT with some piccys...
Posted by Stella Price at 6:47 PM 1 comment:

And Im not ready. Today is going to be cleaning, picture hanging, finishing packing, and doing all the necessary hooey to finish up everything. I swear i always bite off more then i can chew.
With everything going as is, Im very excited, and I get to see Aud very soon!

Silk and Steel is now out for review to a few places that i KNOW will get me the book quickly, and that makes me happy. Im hoping that Ill get some reviews while at RT so that Ill feel a bit better about releases on the 12th. I still feel like i havent done any promo for it.

Deep Water will hopefully be finished before we leave. we are only about 4k off from target so its not so bad, but Im now stressing about it. And I really dont feel like i have gotten enough promo stuff for RT. I know Im going to forget something vital.

But on the upswing, Stargate is on tonite and I'm excited... Its my calm zone and couldnt have come back on at a better time. Im seriously thinking of skipping out of shit on friday coming at RT to hangout upstairs and watch it even though Ill be taping it with the DVDR. I know, Im a nerd.

So tomorrow is last minute shopping, making hair appointments for Aud and I, getting the loose ends tied up and generally just freaking out. Nervous? fuck yeah.
Posted by Stella Price at 9:41 AM No comments:

Email ThisBlogThis!Share to TwitterShare to FacebookShare to Pinterest
Labels: RT

My sister is here in one week! Oh! Can you stand it!? Im so excited, and I still have a TON f shit to dobefore her and her hunny show up on the noon bound plane from Scotland. Then the real fun (and stress) begins.
We are almost finished with Deep Water, about 6k more and we should be done. Thats my task for today, bulk what we wrote last night, and get another part started. Im hoping that we will finish by friday. Well thats the plan anyway. I hate working under pressure, but Aud seems to thrive in it so... we compromise. Im just hoping we finish this one quickly, so in May we can finish Gifts to give to Kat for September release. thats looking at about another 45-50k added... so Im praying we do it in the month of may.
OOh and We now have Southpark Icons! 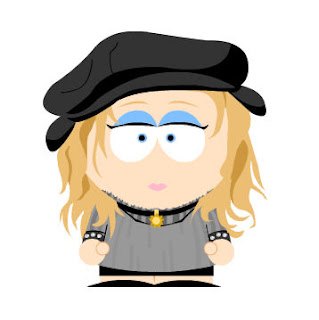 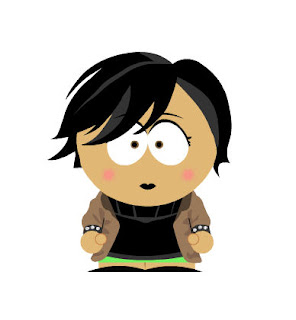 We Sold the Keepers of Twilight series! the first, The Soft Edge of Midnight is the first in the series and its out October 2007, with print to follow!!! who won the series? SIREN PUBLISHING, our new and awesome publisher! heres the cover: 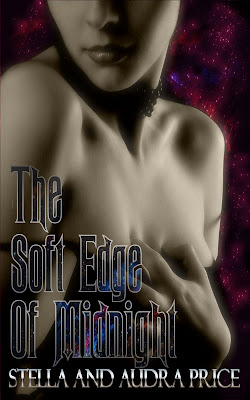 We are soo excited to be part of the Siren Family! Im looking forward to this new venture so much!
Posted by Stella Price at 12:29 PM 1 comment:

So I was looking at the Sugar and Sin page at Amazon last night and noticed something spectacular... We got paired!!! in less then three weeks we have sold enough on Amazon to get paired up with another book (which right now is one of Lauren Dane's books) and we really wanna say thank you! I know a lot of authors that have been out for ages on Amazon and haven't been paired yet so this is a big deal for us.

See this book is our baby... hell the series in general is our baby, and seeing it appreciated and recognized is really amazing especially when we were told it wouldn't sell. So thank you to those who have bought it and Thank you to those who are going to buy it. We cant do this alone and its you reading and buying that really makes it grand.

I have recently gotten a few IM's and emails about how much people loved the book, and i gotta say, its a major great feeling. Don't get me wrong, hearing my friends say they like it is awesome, but hearing from someone who has no clue what kinda person I am, telling me they tried the book on a whim from a recommendation from someone else, and loved it, are ravenous for more... I'm speechless.

Now its really all about promo and getting the name out there for us, and RT is going to be just the place to do it. With this new information, I'm more excited about RT, as i feel that all our efforts so far have been paying off. Its encouraging, and pushes me to do more to get more sales and work out... and its all thanks to you, the reader. so thank you.

On another up note, the Dragon Elemental series is doing great as well. We have hit #20 on the FW top erotica list and are sitting pretty at #1 on the FW MGP list. Im taking this as a major score for us, and i hope it will help push us to where we need to ultimately be for our great sales to continue, print. both series are doing good, and Sugar is doing fantastic so far in print... Im so hopeful its scary.
Posted by Stella Price at 11:22 AM 2 comments:

Audra will be here in two week come Tuesday. TWO WEEKS! i haven't seen my sister since last July so im SO excited! and i get to see my future brother-in-law as well, and to top it all off, we have RT as well. April rocks.
So Easter was normal, hell i did covers all day. Im packed, and theres few things to do before she flys in so things are going well, though i do need a haircut.
And did I mention that its damn cold in NY? not happy about that, I'm really looking forward to the warmer weather.. so Houston will be a welcome change.
OOh and we got the piccy of the bath mists! 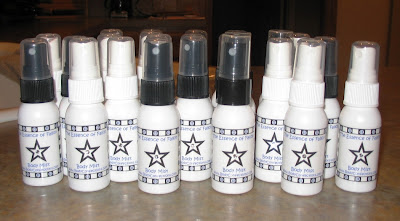 They Are the Essence of Fallon, or sugar cookie scent (yes, to Astrid, Fallon smells like sugar cookies, hence the nickname...) and you can pick your own up at Body Confections.
And whats cool is that every label has a Swavorski Crystal in the center of the star. SO COOL. We will have a few at RT so if your cool, pop by and you might get one. Heh. They are limited but hey try your luck. (btw.. one will be in the Stella and Audra gift Basket.)
Posted by Stella Price at 12:34 AM No comments:

Well it seems some authors are getting chastised for their heroes screwing other chicks during the course of the book. All i can say to that is been there, done that. The Eververse series was rejected for that very reason from pretty much ALL the big e pubs (and TOR) and yet, the damn book has sold over 100 copies in print in the past three weeks from Amazon, and its gotten some amazing reader reviews as well.
I think thats pretty damn good for a book one e pub said "had a hastily thrown together world, Characters that had no depth and a hero who's sexual exploits will turn the reader off. Good luck ever getting it published."
Polyamourous pursuits are fine with me. And to our own credit, Fallon's sexual adventures prove to identify him as a person, and his personality, and helps him make a decision later on in the book for the benefit of all parties. Hes not just screwing for screwing's sake really, theres a bigger scope to the story.
Im not trying to justify what he does, he does that very well on his own, only explain to those out there still locked in the "one guy, one girl romance" that things are changing. the amount of people in RL that have only been with one person is in the minority, and aud and I like to think we write true to life. lets not forget, Fallon, along with Feyd, Arcady, Cash and the rest of the guys (and girls for that matter) are residents of a sub-society, a culture that runs on sex, blood and money more so then regular human existence.
One guy, One girl is outdated and more in the realm of fantasy then you know. (right, like that millionare art gallery owner with the cocky attitude didnt have an orgy a la American Psycho style the night before he met his heroine? Show me that, it helps to give me a feel for the REAL character, because no one is as good and pious as they make them in literature.)
And another thing, If you can handle it in your TV and your movies, why not your books as well? I mean I know the general pulp reading public can handle it (hello... Anita Blake anyone?) but why are they getting so starchy about e book? Aren't we supposed to be paving the way for the new literature? Why is it people can handle threesomes, orgies and 5 ways, but hen the Hero gets down before getting down with the heroine people's panties get in a twist? I mean come on, when that happens in a book i take it that the hero is a very sexual person, and that when he gets his heroine (insert you favorite genre here) hes either gotta quell that need and fire to get past her virginal defenses, or square with the fact that the chick was probably just as big a ho as he was before they got together... honestly no man that LOOKS like these heroes would be saving it for their true love... (unless they are batting for the other team, but im not getting into that.) So come on people.. be realistic.

Email ThisBlogThis!Share to TwitterShare to FacebookShare to Pinterest
Labels: debate, Eververse, the changing face of Literature

Goodies at the DDD 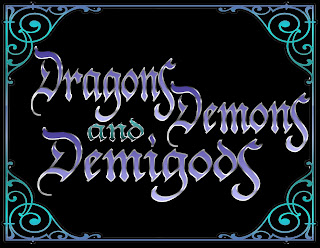 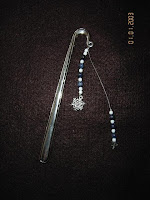 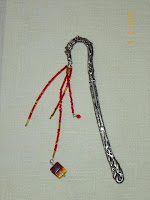 Isnt it cool? Its our Dragon Elementals series gift for the DDD raffle.

and this one, is the Sugar and Sin git we are doing for the raffle. Arent they pretty? I think so. So what are they? They are pewter book marks, each one of a kind and each done for the sole purpose of a great gifty for RT. Along with the other girls in the DDD, we all have a wild half hour ahead for all of you going to RT. Make sure you come and hangout with us.

We will have some other limited edition goodies at the DDD time as well. come to our table and pick up a scent sachet in one of 4 scents, signed book plates, candy, pins, stickers and other goodies.

OOh are we excited? hell yeah we are!
Posted by Stella Price at 1:20 PM 3 comments: