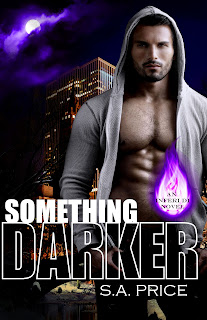 Checking in... New book on the horizon!

Lots of time has flown by since the last post here hasnt it? Lets see...

AAD happened in NOLA, which was awesome, I got married in NY which was even more awesome, Resplendence Publishing picked up our Djinn series (previously published) and gave it swank new editing and swank new covers, and Audra and I have decided to put a book out self published this December... which is why I'm resurrecting this bloggy a bit... to keep people in the know.

So... If you would like to hear about all the awesome this book will be... and I KNOW that that you do... head over to our FaceBook page where Im going to be posting most of the info and the contests!

The book will be out December 18th exclusively on Amazon in both e book and print so we are really excited about this release... its a book we have been sitting on for over 2 years... so, its about time the world sees it!
Posted by Stella Price at 9:57 AM 1 comment: 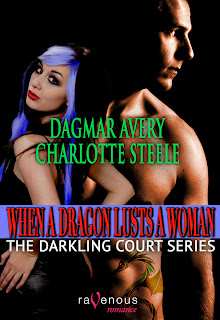 
Blurb:
Looking forward to the nuptials of her best friend and charge Prince Declan, Sorcha Ilisse knows what’s in store for her: Sex, sex and more sex. The ability to see some favorite lovers and indulge in the debaucheries of the event riding high on her senses, she didn’t count on the one person she didn’t want to see in attendance.
Jaerik, a green Dragon and general of the Dark fae was snubbed by Sorcha once upon a time, but years have past and he never forgot the burning obsession that was her lithe little body gracing his bed for always. She spurned him when he was a young Dragon but now a man, he’s set to prove to her that he is exactly the kinda male she needs.
As the festivities open with an annual hunt, Jae sees his window to seduce and ensnare the one woman he could see himself with for always…

So what do you think? Its a new book, and super filthy... Jae is not a dragon to be deterred! One commenter will win some Darkling court goodies in the mail!

So dont forget to hit up these awesome authors for some naughty sexy saturday fun as well:  Jessa Slade
Sascha Illyvich
Bridget Midway
Jae Lynn Davies
Posted by Stella Price at 4:00 AM 1 comment: