Just Released! A new tale of scales and sex....

The plan was to steal his bike and ride outta town. She didn't count of him stealing her freedom, or her heart.

Reece Evans, the nest bad boy and only male Anaconda in the NY nest, is NOT looking for a mate, but he is looking for a wild ride. When he goes to Dry Ice one night, he meets Carmen - a viper and a rogue - and the attraction is beyond hot.

When she steals his motorcycle from under his nose and then calls him to bail her out, Reece sees his opportunity for a very satisfying tryst still within his grasp. He agrees, on the condition that she stays with him a month, and becomes his sexy plaything.

Little does he know he's sealed his fate, Carmen is exactly the snake he never knew he couldn't live without.

And guess what? we found out it is a RECOMMENDED READ at Joyfully Reviewed!
So who wants to win some goodies? Its easy! simply read the book and leave a review for it at Total E bound and you are entered! Winner receives the signed print book of their choice (except The Soft Edge of Midnight, there's not a shot in hell I'm getting any of those any time soon) and a promo pack! Cool right? Thought so. Contest starts on June 22 and runs till July 15 so there is plenty of time to read it!

Posted by Stella Price at 11:55 PM No comments:

So Audra and I got the cover for the third in the snake novella's A Gift of Daybreak. Wanna see? I thought so! 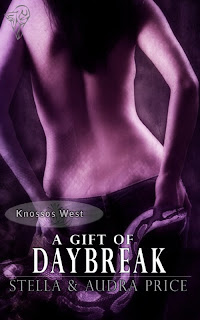 When Andy Derelle went to Las Vegas to enjoy a wedding he never thought he would be propositioned by one of the most notorious nests in the country to audition its female members for a possible mate. But there he was, with six females to choose from, females that were coveted by their own territory's men.
Fajer Copeland, the only non-venomous snake of the southwestern nest, and their most sought after beauty is not looking for a mate, and is fine with being alone. Until the night Andy shows up in her bedroom doorway. Can a love blossom when two people are thrown together that have no interest in relationships?

Yes, its the third and final story in the Knossos West Novella's for the three cousins. it comes out August 10th and Im SOOOOO excited about it! Hopefully you guys will all go and read them!


The second book, Surrender in Moonlight, will be out later this month. and then guess what? its Satyrs for the Fall baby!

Audra and I are sending Masquerade in to our editor this week, and have already begun outlining Drake's book, and doing a few scenes. Its going to be the best book yet... I mean when it opens up with a poker game of all our single characters bitching about everyone else falling into relationships, and then Drake meets Enid... You know its going to be interesting.

So I'm back to writing. I have some ideas to get down. Ooh and don't forget to come and hangout on Shadow Heights this Thursday, I'm throwing a early summer party and the amount of goodies you could win from TONS of fantastic authors (including myself, Alexandra Ivy and Joey W Hill!) So sign up and hangout!
Posted by Stella Price at 12:48 PM 5 comments:

YAY. very happy. So now I'm trying to finish up some extra shit by way of Masquerade to get it to Holly by Friday, and I'm working on a Dagmar Avery short for the Pantheon Antho. Looking forward to it.

So Aud and I are doing well, and busy. But you as a reader and fan, should come and hangout with us at our FORUM. (oh and spammers, you will be deleted, your IP address logged and blocked so dont even try it) On June 11th, we are having a early summer online picnic with some great goodies and giveaways including some goodies from our buddies Joey W Hill and Alexandra Ivy.

So come and play.

Back to the grind. Im being productive today.
Posted by Stella Price at 1:48 PM No comments: