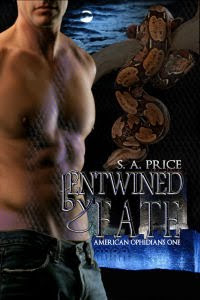 Thirty females of the Ophidian race have gone missing, most from the transient nest of Las Vegas, a rogue and unofficial nest run by the Saint, John Merrick. Believed to be dead by every Archon in the states, Merrick leads a quiet and unassuming life, saving those of his race that are lost and need it most. It's a solitary existence, one that he hates every day. He yearns for his mate, the woman he left over a decade before, and the woman who thinks him dead to this day.
When Elise Rizdon gets the official invitation to the Archon meeting in Ohio by the leader of a new Midwestern nest, she never expected to see the love of her life at the woman's side, a man she was told was dead and buried. She lost him once upon a time, and she never fully recovered. Focusing on the issues, and not the man that has always made her body burn is not going to be easy. A disturbing event is on the horizon, one that threatens all Ophidian's and their way of life. In order to survive they will have to work together, give up old grudges and take chances on the things that matter most. Love, life and the continuation of their race.

Interested? Well you will have the chance to help us prove that scales are the new fur in January 2010. Ooh and the book will be available simultaneously in e book and print and will be at RT this year. I'm very proud of this book, I know Audra is too. We hope you will try out the book and help us bring this kinda shifter into the mainstream. Im thinking of doing a sprout for this as well.

today is the day!

Audra is on a plane on her way over, and I'm getting ready to hot the AAD hotel to bring all the stuff over (Seriously not the most convenient of times but i have already accepted this). Audra will be touching down a little before noon, so this is my final blog of the week, I think. If your going to AAD, you will see us Friday, but I will try to update our bloggy before, and or our twitter.

Its craziness, seeing her again after a little more then a year, but I cant wait to hangout. We are a little restricted, what with her being 5 months preggers, but it should be fine. So wish us luck in NYC, and for those of you coming to AAD, we will see you then!
Posted by Stella Price at 6:52 AM 4 comments:

Tuesday is the day!

Tuesday Audra will be here. Im so EXCITED! For those of you coming to AAD and you didnt meet Aud at RT 2007, you are in for a treat. pregnancy hasnt mellowed her, which is going to be hysterical.

Audra and I have a wild week ahead with Mum Angela and Jane. Wed we will be in NYC doing the "tourist" thing, most of Thursday as well. Im looking forward to showing Audra places we write into books, Belevedere Castle, BARCODE in Times Square, Tavern on the Green, St. Marks St...

And we will be hitting dinner in the city too. Which should be fun. HEH. So im on my way to bring the goodies for AAD to the hotel today, and make a bunch more sets of Horns too. Busy busy till Friday. LOL.

Well I have been wild from this weekend. AlbaCon was fun, the people I met, the ladies I hungout with, the panels i was on and the fun book signings rocked. Everyone I met (Jan, Debi, Darlene, Kaity, Debra,) and the ones I know (Jess Andersen, Jackie Kessler, Susan Crowley and Toni Andrews) was great and I had a ball. Oh and my pictures all came out like crap. Poo. But on the upswing, I figured out the flash on my camera, two years late I know, but it works now. Teach me to read the goddamn manual. LOL.

Audra is going to be here in 8 days. Im already a bundle of nerves and have NOTHING ready for her to be here. Yes, Stella is not organized and ready for something- this is it people! Armageddon! Honestly though I got almost everything ready, so its not too bad. I will be cleaning most of this week and weekend, and I'll be picking her smarmy pregnant ass up on next Tuesday morning just before noon. Yes, life is good.

AAD is so close as well, I'm really excited that its finally going to happen. I got my awesome costume, and I cant wait to take pictures of me in it because its ultra lush. I love Brandi and bow to her costuming skills! Just wait till you guys see her Etsy store. OMG your all going to want your own Brandi creations.

Well must get back to the grind of working. I'll be updating again before the end of the week!
Posted by Stella Price at 8:22 PM 6 comments:

Info on aad... and other issues.

Lots going on this month. Serious lots. Craziness. Aud and I are writing up a storm, we have had some choices to make by way of a few MS's and some inside information. Its going to be good.

So Lemme get this outta the way now, and If you dont like my opinion then dont read my posts:

I could give a FLYING FUCK about the Polanski bullshit. It happened ages ago and its just rehashing the past. What bothers me is that son of a bitch Michael Vick is back playing footbal with not so much as a fucking slap on the wrist! Yes, I care more for the animals that cant defend themselves against asshole humans who feel the need to make them mean and fight each other. Michael Vick should have been shot in the head, as an example for people who hurt animals. Extreme? To me, not in the least. Had I been on that jury I would have played the 12 angry men game to push for the death penalty and thats no guff. Now that that muther as back playing ball, its like his sins didnt happen, and thats not cool. All his money for the next 10 years should go to animal rescue and rehabilitation centers, and that's me thinking hes getting off lightly. The SOB didnt even have to serve time in a place where he could see the effects of his negligence. So I think we need to be concerned with a system that lets both types of predators go without much of an issue, we need to rethink shit. But Michael Vick should pay for the rest of his life for causing fear and harm. It sucks we don't have the same laws for animal offenders that we have for human offenders.

So that said, you don't agree, that's your choice. This is something close to my heart and I think the Son of a bitch should pay till the day he dies.

Now that my issues have been aired, Lemme tell you guys that if your coming to AAD, Your going to have SO MUCH to go home with! Just you wait. My bedroom in my condo looks like Im a freaking storage facility, but OMG have I got the sneak peeks on all the awesomeness. With the amount of mini events, goodies and free books we will be giving out you will be so excited.

Ooh and guess what? the Pantheon Authors are doing a cool alcohol fueled mini event called An Evening with Ambrosia. Readers will have the chance to sample the drink of the gods, and get a bunch of goodies that are from the gods, meet the authors and get the books. Cool right? We thought so.

So Im back to writing, I have to finish at least 2k today. Lates.
Posted by Stella Price at 9:35 AM No comments: