Cover Reveal: THIS IS FOREVER

Maybe you have seen this little graphic about? 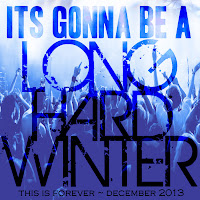 Did it get you curious? Winter is the very sexy bassist for the band 13 Shades of Red, and his book, THIS IS FOREVER will be releasing December 2013. Wanna see the cover? 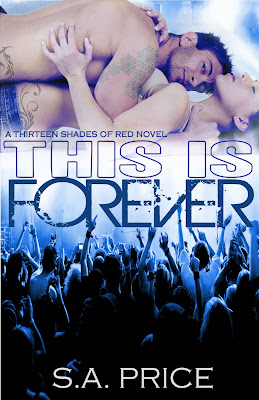 Now isn’t that just sexy? From now till December if you check out some of your favorite blogs that are rocking the mini graphic on the side column, we will be giving some teasers, excerpts and interviews about the book, on the 10th of the month.

Believe me; it really is going to be a Long Hard Winter. *wink*

And now… for a sexy sneak peek at THIS IS FOREVER…

Seeing Lola after eight months was a fucking kick in the teeth. She had changed her hair, it was purple with black streaks, and she was wearing one fucker of an outfit. Platform Mary Jane’s, her signature, purple torn fishnet thigh highs with garters that ended in bows with skulls on them, micro mini in black satin with a lace trim. She had tripled up on her belts, her little baby tee molding to her torso like a second skin. It was razor cut in places, showing skin and the purple of her lace bra. Her arms warmers were knitted with little skulls on them. He was pretty sure she wasn’t wearing underwear also, the girl just loved to shock. Dare he think it was for his benefit? He wasn’t sure he even saw her, thinking he was dreaming the perfection before him.
But dreams don’t blow you off… at least his didn’t. His dreams, her especially, blew him. When dreams blew you off, those were called nightmares, and those sucked. Sucked like life was sucking right now. She had walked in with the rest of her band, greeted everyone but him, her gaze lingering a little too long on Colin, Rhys’ little brother, but then moved on as she kissed cheeks and hugged people.
He had to adjust his groin, discreetly of course, when she and Saffron hugged and snuggled. Apparently over the past several months Saffron and Lola had become quite the BFF, with Lola staying at Saffron’s place in New York when she had to go in for several shoots and meetings with her record company. Rhys had teased him about getting face timed and seeing both of them in little booty shorts and white tank tops… but he didn’t think they were that close.
And worse, he didn’t think seeing her all snuggly with Saffron would illicit the images rolling through his head. Not that Saffron wasn’t hot, but he just didn’t dig his best friend’s girl like that.  He grabbed a tootsie pop and unwrapped it, sticking the thick ball into his mouth. He watched her move from person to person, but never to him.
What. The. Fuck.
When everyone sat down, she sat at the other end, didn’t even bother to look at him. He went through dinner in a blur, his anger getting to him more and more. What the fuck was going on? He was beginning to feel like he was invisible. Maybe it was a nightmare?
When she got up and went to the bathroom, he followed, after exchanging a meaningful look with Rhys.
“So you’re just not going to say anything to me?” he said as he caught her coming out of the bathroom.
She looked at him and then sighed. “I didn’t want a public thing to happen.”
Public thing?
He cocked his head and scowled. “And what the fuck does that mean?”
She looked him up and down. “I don’t know if I’m ready to say hi like I want to.”
Winter rolled his eyes. “So you can wrap yourself around Saffron, eye Colin up like he’s a steak, which by the way he’s not even eighteen yet, eww,” he ticked off on his fingers, “Yet you can’t even just turn and wave at me?”
Lola shook her head. “It’s not what I wanted. And Colin is going to be very popular…”
“You just didn’t wanna talk to me at all?” he asked, thoroughly confused. She was the one that pushed for the tour, and by all accounts she didn’t have issue with their past. It was what gave him hope.
She moved closer and shook her head. “That’s not it.”
“Then what’s it?” he bit out, his hands clenched at his sides. Gods, only she could infuriate him like this. Fuck she smelled good. All honey and warm clover… no one smelled like Lola.
Her voice lowered. “Do you like my outfit Winter?”
He growled. Fuck yes he liked her outfit. Loved. Wanted it crumpled on the floor of his bedroom. Wanted to peel it from her slowly, kissing every inch of skin he exposed.
She reached for him, her fingers tugging him closer by the belt loops of his jeans. “Good. You’re supposed to. You don’t get anything from me Winter Tulane. No greeting, no, little wave, no explanation. Eat your heart out baby.”
She got closer, her lips just against his, a slight almost imperceptible move of the hoop through the middle of his lip and then she was gone, back towards the party, her ass shaking with a sashay that had blood rushing from every place in his body to his cock. Fuck. What the hell was going on?
“Hey Lo,” he called after her. She gave him the finger and kept walking.
Game on. Game fucking on, he thought as he followed her back into the room. Confusion didn’t even convey how he was feeling about what happened, but holy fuck the signals she was throwing off were so convoluted he didn’t know if he should fist pump for getting her so close to him or brood over her words.

LIKE? Add it to your TBR pile at GOODREADS: http://www.goodreads.com/book/show/17672271-this-is-forever

Books before this: Giving Up the Ghost (#1): http://www.amazon.com/Giving-Ghost-Shades-Novel-ebook/dp/B00BHMNLN8

Add THIS IS FOREVER to your TBR pile on goodreads and you will be entered to win:
A Merch Package: t-shirt, Poster, Pin, Card, Door hanger, tote bag, and Keychain, a 25$ GC to Amazon.com, a Print copy of Giving Up the Ghost with a special short story from Saffron’s past and a Print copy of You Burn Me.

And a HUGE thank you to everyone that Helped make this Cover reveal Amazing!
Posted by Stella Price at 3:30 AM

Nice post, impressive. It’s quite different from other posts. Thanks for sharing. For more information visit herbal incense for sale